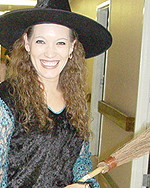 After initially getting angry, she wisely turned to voodoo instead.

Terri Lawson had heard the saying “don’t get mad, get even” many times, but when several of her students complained about the difficulty of her tests, the Basic Packaging & Shipping instructor saw it as an opportunity to put the axiom into practice.

“Yeah, I was upset at first,” said Lawson, laughing. “The students complained that I give too many quizzes and that my tests are too hard. It was all good until four of them went to the head of the department. I didn’t think the complaints were legitimate, so I went to our locker room to throw stuff around.”

Lawson said after a breaking a few things to blow off steam and plotting various forms of revenge, she regained her senses and opted for a different, non-violent path.

“After a couple of minutes it hit me: why not throw some voodoo at them instead? I thought maybe a little magic might just be in order. I mean, if there was ever a time to summon zombies and evil spirits...whew, this was it.”

Lawson’s experience with the magic arts was limited at best, but what she lacked in knowledge she more than made up for in enthusiasm. In addition, what she did know was based on information garnered from some of the best movies and television shows covering the subject.

“I had a little trepidation at first,” said the Associate Dean of the Packaging Department, Wendy Thompson. “Terri doesn’t get a lot of complaints, but student complaints in general are unacceptable, and administration has been pushing us to set an example.

“I really like Terri,” Thompson said, “so when I heard from another professor that Terri was getting ready to pull some voodoo, I knew everything was going to be all right.”

Lawson quickly fashioned a makeshift doll to represent one specific female student out of the problem group. She figured she only had a little time so instead of worrying about making dolls in the images of the other students—four in all—Lawson decided to concentrate on the “loudest, most obnoxious student of the bunch,” and let that serve as an example for the rest of the class.

“I put everything together kinda sloppy,” she said, “but when I asked one of my colleagues who it looked like, she got the answer right on only her fifth guess.

“I tore up some old nurse’s scrubs I found wadded up on the floor, and used some socks and material from a shirt I found in one of the lockers...sorry, whoever’s that was. Then I stuffed the doll with the material and old magazines, and used my pen to draw her silly face.

At first, the only action Lawson attempted involved alternately sticking pins into the top and sides of the doll.

“It was something I saw once on Gilligan’s Island,” she said. “I don’t remember the whole episode...something about headhunters probably...and Gilligan found these voodoo dolls made up to represent each of the castaways. My doll didn’t have nearly the amount of detail as the ones the headhunters made, but give me a break. It was my first try.

“Those headhunters had probably made hundreds of dolls in their tribe.”

Lawson then kind of waved her hand over the doll, mumbling her own version of an incantation (“I think I might of said, ‘Ixnay on the adbay ehaviorbay,’ or something like that”), and slowly began prodding the doll with the pins—lightly at first, then with deep, digging thrusts.

“I was just doing and saying what I remembered from the movies and that television show,” she said. “I realize it was only TV, but I really loved that show when I was a kid. They were always trying to find a way off that stinking island, but Gilligan bungled every attempt. The rest of them were troopers, though, and never gave up.”

When asked if the efforts had any effect, Lawson said, “No. I’m pretty sure they are still on the island.”

Lawson went to the classroom where she overheard one of the other students ask the “target” if her headache was going away. When the target rubbed the back of her neck, and said it was actually getting worse and spreading to her neck, Lawson let out a little high-pitched yelp and clapped her hands together in excitement. Word of the success quickly spread around the faculty offices.

Thompson seemed the happiest of all; a potentially volatile situation efficiently diffused. “I love it when everybody wins,” she said. “Now those students will have a better idea of how to behave, and if not, we still have that doll.”

Though her quick thinking resulted in what was apparently the best possible outcome, Lawson looked dejected.

“All of a sudden,” said Lawson, “I remembered from a movie that these things work both ways. According to the plot, when you do something like this—you know, voodoo or a curse—it also affects the person performing the ritual.

“Paybacks really stink.” She sighed. “I just got a parking ticket.”