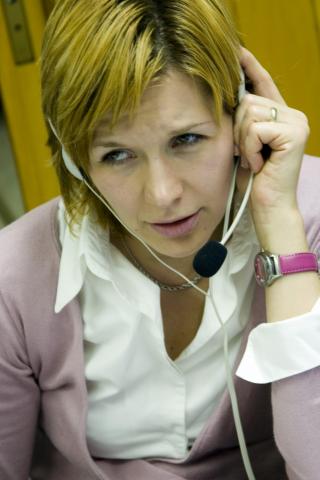 According to stunned coworkers at the Michigan Telemarketing Association—an organization that raises money by offering decals for donations—longtime telemarketer Marion Cousins is planning to go back to Henry Ford Community College next semester with hopes of getting a “real job.”

“I think she’s serious this time,” said Paula Pearson, a coworker and close friend. “Marion’s said all this before, but this time I think she really means it.”

Apparently, this latest decision came in the wake of an especially bad shift during which Cousins was yelled at nine times by people she called—including a woman who told Cousins she had interrupted her dinner and hung up—tipped over an entire cup of coffee on her keyboard, and had a run-in with a manager over a scheduling conflict.

“She requested a weekend off to spend time with her sick daughter and great-aunt, who almost didn’t make it after major surgery recently,” said Pearson, “but they scheduled her anyway. The manager said that’s why they’re called ‘requests.’ It’s complete garbage if you ask me. Marion hardly ever gets the days off she asks for, and never on a weekend.

“I mean, I got that weekend off, and I didn’t even ask for it,” said Pearson. “I’d work for her, but I’ll probably make plans.”

Cousins, 27, has been a telemarketer for almost eight years and, according to witnesses, had not had a day this bad during the entire three years she has worked with the Michigan Telemarketing Association.

“There was that one man she called who really let her have it,” said Karen Singer, who was also on the phones that day, “and that made Marion mad. And then that other lady started yelling, and said this is when normal people eat dinner—oh gosh...you could see Marion was gonna snap. But when she couldn’t get that weekend off to be with her sick aunt and daughter, it was all over. Goodbye cheap little worthless decals…hello talkin’ ‘bout getting a real job.

While Cousins did not immediately return calls, the Association issued a statement, saying: “On behalf of our entire organization, we offer Marion’s family our most heartfelt sympathy in regard to the current situation.

“At the same time, we are very curious as to exactly how many life-threatening, ‘major surgeries’ her great-aunt will continue to require. I mean, for gosh sakes, this is like the fourth time Marion’s aunt ‘almost died’ in what, like three or four months? Come on. We thought she was already gone. And don’t get us started about her ‘sick’ kid.

“We do, however, wish her success in all her future plans.”

Based on her previous schooling—two non-consecutive semesters at HFCC—her work experience, and overall character, those who know Cousins say her real job options appear endless.

“She can do anything she wants if she puts her mind to it,” fellow telemarketer, Lyle Samuels, said. “I think she should be a nurse because the schooling is somewhat flexible, although not really, and she could always stay here and work if she wanted to—and nurses get paid.

“I think it’s really wrong the way they scheduled her,” said Samuels, “but at least someone here is getting a real job. I care about that girl so much I’d do anything for her.