Workers' Comp Not All It's Cracked Up to Be 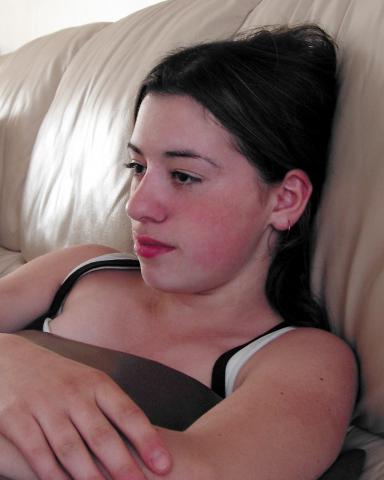 Surprising her friends, family, and even herself, Henry Ford Community College Aircraft Maintenance student Sarah Tansen, who has been out of work for almost three weeks due to a nagging ankle injury, said staying home and collecting worker’s compensation is not nearly as fun as she thought it would be. In fact, Tansen was overheard telling friends that her new schedule is “actually kinda boring.”

The drive-thru cashier at the Burger Joint in Southgate slipped at the end of a shift earlier this month and re-aggravated the ankle sprain she sustained last year while at a previous job. Initially, Tansen said, she couldn’t believe her good fortune. The injury, while not expected to require surgery or cause permanent damage, was just the opportunity she thought she was waiting for to experience the wonders of worker’s compensation.

“I really wanted to try out worker’s comp after I got hurt last year,” Tansen said. “This is something I’ve thought about doing for a while. So when the doctor told me to stay off my ankle after this latest slip, I was like, ‘woo hoo.’

“And I’m gonna get paid for this?”

When she returned home after receiving the news from her doctor, she plopped down in the middle of her living room—actually, her new crutches sort of tripped her up—and thought about all of the cool and exciting things that she was going to do.

“I knew I had to take it easy, but I figured I could finally set up my apartment the way I always planned, I would fit in all the shopping I never seem to have time for, and I’ve always wanted to learn Japanese.

Soon after, however, as she mentally crossed one unrealistic activity after another off of her list, a deep depression set in, along with an unbearable degree of pain in her ankle.

“I forgot to fill the subscription for my pain medication when I left the doctor, and whatever magical potion he gave me at his office was wearing off fast.”

When Tansen attempted to call someone for assistance, she quickly realized her new routine, awake during the day and asleep at night, is in complete contrast to her friends’ schedules.

“That’s when it hit me that all my friends are people I work and go to school with. I’m not one to judge, but those flunkies sleep all day, blowing off school in the process, and get up just in time to go to work. Then they’re out after work until the bar closes.

“Maybe it’s time they thought about growing up.”

Tansen said the injury requires her to use crutches to move anywhere not in hopping distance, and relegated her to a life of watching television, surfing the Internet (until her computer went down), and eating whatever she can carry home from a nearby convenience store.

“I can’t do anything,” said Tansen, sprawled out on her couch with her foot propped up on two pillows. She arranged the items she requires most frequently—three different kinds of Doritos, a two-liter bottle of Faygo Moon Mist, and the television remote—within reach, though these items fight for space with dozens of empty plates, glasses, and several unopened textbooks.

“I mean, my apartment’s trashed, my car’s a stick-shift so I can’t drive anywhere, and I can’t quite get the hang of how to use these stupid crutches...so even laboring up to the corner store is like someone’s idea of a bad joke. I had to carry this two-liter of Faygo back home by gripping the top of the bottle in my teeth.

Tansen said that since her computer got a virus last week, there is little to do other than watch TV all day, and even that’s become a chore.

“Yesterday I couldn’t find the remote control so I stood there in front of the TV like an idiot, pushing the channel buttons on the cable box in time to each hop.

“I have over three hundred channels. That’s a hell they don’t tell you about in Sunday school.”

On a bright note, while this experience has not been the carefree vacation she anticipated, Tansen said she’s had ample time to rest and has a new appreciation for her job and classes.

She also figures she’s learned a lot more by being at home and not going out every night with her friends.

“Did you know that the tiger shark, due to its aggressive nature and frequent proximity to people, is the shark most dangerous to humans in terms of fatalities? I always thought it was the Jaws shark.

“I’ve become an expert on all kinds of interesting subjects. I can count to four in Japanese—ichi, ni, san, shi—Jack McCoy is the best District Attorney on the planet, and I’m pretty sure that John McCain died years ago.”