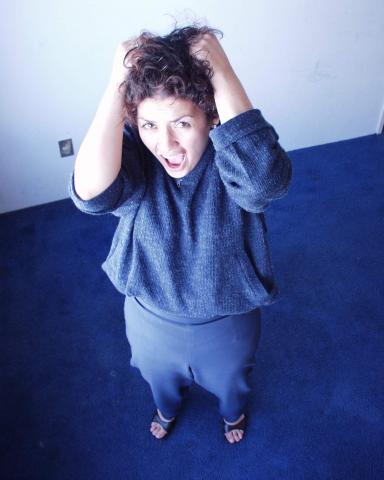 Henry Ford Community College’s newest instructor, Bonnie Santana, who worked as an aide at two different junior colleges before taking her current position, claims she is pretty sure she’s never worked with as immature a group of people as the students in her history class.

“It goes beyond ridiculous,” said a frustrated Santana. “I mean, someone can say the simplest, most innocent thing, and nine times out of ten, one of these hyenas will run off with it—usually in the direction of some double-entendre or childish tangent.”

As a student at the University of Michigan, Santana studied the historical periods (roughly from the fall of Rome to the present), combining history—including archival and oral history research—with courses in historical and vernacular architecture, material culture and folklore, and archaeology. Santana’s teaching background includes stints at Henry Ford Elementary School and KinderCare.

On her first full day at HFCC, Santana overheard a male student overtly flirting with one of his classmates, using vague profanities and what she perceived as an aggressive tone. Though the female student insisted the classmate was, in fact, her boyfriend, Santana immediately herded the offending young man directly into an open corner of her shared office, documented the incident in writing, and called an emergency meeting for the entire class.

According to sources, the one-sided discussion included a lecture on behavior she deemed inappropriate, covered the subject of sexual harassment in detail, and culminated with a complete ban on superfluous conversation in the classroom.

“I thought the meeting was relatively well-received,” said Santana, “until a small group of wiseacres decided it would be funny to act up. They pretended they were sneezing, but the fake sneezes were only to cover up the fact they were really saying the words ‘bowl’ and ‘ship.’

”I don’t get it,” she said curiously.

Santana said the students in question sat together at the back of the room, where they implemented the classic gag…but apparently bowls and ships are contagious.

“Initially, it was just a few perpetrators, but then every time I turned around, a ‘sneezing bowl ship’ came from somewhere else around the room.”

Witnesses said the game successfully disrupted Santana’s agenda and, with everyone’s attention wandering, the lecture rapidly deteriorated. Santana said she isn’t sure when, or even if, she will plan a follow-up meeting.

Santana said the juvenile behavior seems to escalate with each day. “The first day was bad enough—any time I said anything to anyone, I felt as if they were mocking me, testing me. And by the third day, right after I posted memos with my classroom rules where the students could see them, people immediately started defacing my policies and writing their own little comments. What is this...12th grade?”

She paused self-consciously. “And my breath does not smell like a donkey’s behind.”

According to Santana, in addition to her donkey-breath, other comments written on her memos included critical remarks about her “misshapen head,” the fact that she probably stands up to use the bathroom, and a list titled “Top Ten Reasons to Love Ms. Santana,” followed by a blank page.

The department head, Bruce Simmons, talked about his new instructor: “On the one hand, we are lucky to have a dedicated individual who raises the bar for the rest of the staff, and places such a tremendous degree of importance on professionalism.

“At the same time…” he continued, clearing his throat. “I’m sorry. I just can’t keep a straight face. Have you ever heard of a classroom environment where even innocent socializing is not allowed? I mean, come on…really? Ha, ha. I give her two weeks—tops.”

To illustrate his point, Simmons pointed in the direction of Santana, who was dutifully roaming the halls but unaware of the gathering of students laughing behind her. Discreetly taped to the back of Santana’s blouse was a sign created out of one of her own memos. The sign read: “Ask me about my rash!”