Waiter Learns Verbal Tips Worth Their Weight in Gold 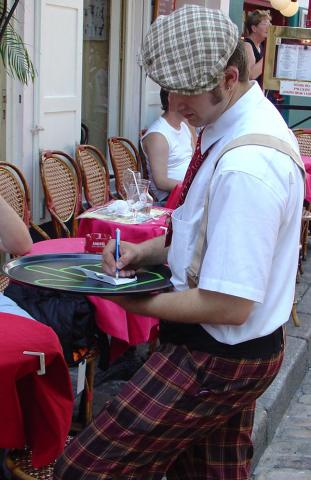 Nearly broke and on the verge of eviction, Foods ‘R Us waiter Stuart Tottle decided last week to cash in his substantial savings of service-related compliments and guest appreciation.

Tottle was able to cover his bills—rescuing all from “past due” or “shut off” status—and bring all but three completely up-to-date.

“I didn’t know what I was going to do,” said Tottle. “All of my bills were coming due at the same time, and when I say ‘coming due,’ I mean I was already really late. I owed everybody...I was behind on my car payment, I had to pay back the money I borrowed from my parents, I was about to be evicted from my apartment, plus I’d been eating macaroni & cheese for weeks...that, and anything I could grab from work.

“We’ve been busy at work, but the cash hasn’t been that great so I was really hurting. Then I remembered I had this huge balance in my verbal tip account, and I knew I was gonna be just fine.”

Tottle quickly began to tally up the verbal currency: “You’re an awesome server!” “I’ve eaten in a lot of restaurants, but you are one of the best waiters I’ve ever had!” “That was a truly enjoyable dining experience, Stuart.” “Thank you for the excellent service.” “Next time we’re here, we’ll ask for you!” And so on.

As Tottle continued to organize his accumulated stash, he started the task of methodically hammering out the bills one by one.

“I was caught up in the excitement. First I got on the phone with some of the important bill collectors. I would’ve taken care of my landlord, Mr. Adams, first, but I wasn’t able to get a hold of him right away. Then, after the main ones were taken care of—like my car note, lights and gas, cell phone, stuff like that—I called the other ones, you know, like my cable company, Blockbuster, and my parents.

“My parents are pretty much loaded anyway, but they were thrilled when I finally contacted them. I’d been avoiding their calls for months.”

What Tottle didn’t count on was that many of the bills were higher than he anticipated due to late fees, and he was rapidly running out of stored guest gratitude. He was forced to re-evaluate the level of appreciation conveyed by specific guest comments.

“I had to analyze,” he said, “what, exactly, that table of teenagers meant when they told me that I was ‘better than their last waitress…that girl with the two broken thumbs.’

“That’s sort of a compliment, right?”

Another example, according to Tottle, was when old Mr. Thompson said, “You forgot the whip cream for my dessert, loser,” and his wife piped in, “Oh, now Henry. You really don’t need that extra whip cream anyway.” Tottle admitted that he may have read more value into Mrs. Thompson’s comment than maybe he should have.

“Normally, I would blow a small compliment like that off, but things were getting tight.”

Still, while the seemingly small verbal gestures—“That’s a very white shirt, young man” and “You don’t really sweat much for a fat guy”—were adding up, Tottle had completely forgotten about his rent.

“I rent out a small apartment above Mr. Adams’ garage, and at the time I was like three months behind. When I couldn’t get a hold of him, I took care of all of my other bills…but then I remembered the rent too late, and I was like, ‘Oh man!’

“I got on the phone with Mr. Adams and told him, and he was like, ‘Tottle, consider us even.’”

Though all of Tottle’s bills are paid for the moment and his income is gradually starting to pick up, a small degree of apprehension remains regarding tax season. He recently had a bad day at work, for example, and was stunned to learn that guest comments such as, “You are the absolute worst waiter I have ever met” do not qualify as a tax deduction.