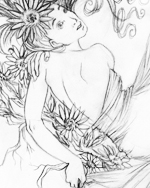 Translated Title: Exodus of the conflagration
Translated from Portuguese to English

When Maria was born, she was not as pretty as the babies people see in magazines. However, she was not exactly an ugly baby either. Her appearance was unique, almost strange: her skin had a reddish hue, wrinkles, and she had the most gigantic eyes. At first sight, her mother’s mouth stretched ear-to-ear as she cried tears of joy at the sight of the tiny creature. Through tears she said, “You shall be the one; from the dreams of reality. You are the perfect fit. You are the one swollen by other’s thoughts. You will be the idea, the threaded idea that leads nowhere. You will be called Maria, the mother of the world: appropriate to humanity, and perfect to no one.”

Maria was a small child with long, slender limbs. She was such an awkward mixture of uniqueness and simplicity. A small, red duckling lost in the ocean. She was not bright or exceptional, unable to hold a candle to brightest of the stars. Granted, she wasn’t completely useless either. She could sing, draw, paint, play; but didn’t know exactly how to be herself in front of other people. She was neat, organized, and clever enough to fix just about anything. Maria learned how to patch clothes, repair popped buttons, but when her work was complete, she would return to a state of listlessness. In fact, she always felt a lingering tinge of boredom.

She would go play with the dogs, but wasn’t too fond of cats. At school, she learned fast, but information never seemed to resonate for long. When alone in the house she would to try on her mother’s make-up, but she always too liberal with the brighter colors. Often, Maria would study feverishly, voracious to consume every morsel of information. She wanted to do everything, be everything, unable to choose between branching paths. She believed she could attempt to climb all the grand mountains at the same time, which, in turn, landed her the valley in the middle of nowhere. Not having been able to climb any mountain and too scattered to have learned anything deeply. Maria was as scattered and mismatched as the palate of colors covering her face.

Sitting in the middle of the valley of nowhere, she looked up to the sky… “Ah,” she thought, “How I would like to fly up above those mountains, up above it all of this. To see the world as a tiny grain, and hug it tightly in the palm of my hand.” Maria wondered why she had to choose. Why did she have to choose one path, to do just one thing at a time? Maria stopped sorting through her thoughts, and sat too confused and conflicted to know what to do next. She looked at the world, but didn’t act on her thoughts. “There are too many Maria’s in the world,” she thought, “how can I be special; at twelve, how is anyone special?”

She decided that nothing good would come from these thoughts. She took out of her pocket a candy wrapped in a red-and-purple shiny paper that her aunt had given her as she started walking back home. On the way, she saw an awkward old woman standing straight in the middle of her path. The old woman stood there, looking at the girl with eyes enclosed by shadows cast by her silver wild hair. The old woman had a far-reaching sight, as if she was looking into Maria’s soul. The old woman had a hunchback, which made her stand as if she was about to rip apart the air in anger. The old woman ceased to move for what seemed like a long time. Maria suddenly felt uneasy about eating her candy, she felt guilty about enjoying her savory treat in front of someone who had nothing. Maria wanted to avoid displaying the fruits of her privileged life in front of this poor old woman; to avoid the guilt it made her feel. Therefore, Maria stopped, again, without knowing what to do, juggling her thoughts.

The old woman lifted her eyes, and through her gazed jumped inside Maria’s eyes. The old woman’s eyes were entirely black like an abyss. The abyss engulfed Maria on an instant. Maria was too small and innocent to have the strength to fight against this attack. Maria just stood helplessly; hypnotized. The candy she hugged tightly in her hand, the way she had wanted to hold the world fell from her grasp. The old woman laughed a laugh that echoed in Maria’s soul. The high pitch noise, loud and demanding, exploded everywhere; poor Maria cried. The old women ran away through the path that now seemed to have no direction, her laugh still wandering around through the woods, stables and ridiculous man made walls. The old woman had vanished, and Maria could not muster the strength to flee. Maria looked through the path that lay head, into the distance, as one stares at nothing.

Maria developed a fever that could not be broken. Days so many days, filled with numerous medications, and the many doctors who tried to treat her. All their attempts were fruitless. Her fever got worse, so much, so that people began to fear the child. People tried to stay in the same room with her, but stayed somewhat far away from the bed she was confined in. The room itself became a furnace, housing an unbearable heat, kindled by Maria’s fever. No air conditioning or ice water baths helped. In fact, it reached a point where anyone who dares to touch her skin would burn and boil, leaving hideous scars. People cowered away from Maria. The fever did not.

She was alone in her bedroom, lying down in the black, burnt bed of now useless mattresses and sheets that had burned to ashes. The air was thick and suffocating. She would dream she was dead was dead in her sleep only to emerge for her dream world to her mother talking about this bad place where people burn when they are bad. She felt guilty for being ill and cried, her tears boiling into mists of steam.

All her time spent confined had eaten away at her, everyone’s words, she had to run away. Every step that she took burned the ground, the plants she stepped upon, and her neighbor’s cat that was excessively curious for its own sake...everything that came close to her would burn. Sometimes things would burn if she simply stared at them for too long. She still got out of the bedroom, out of the house, and into the streets. Maria always had huge eyes and liked to look at everything...

Soon, so soon, the entire city was in flames. Houses, families, and the little colorful birds that sang every morning...everything screamed in pain. Maria didn’t know how to care anymore.

It was there, in the middle of that inferno inside of Maria’s heart, the old woman appeared again. She still laughed, as if she had never stopped laughing. This time, however, she laughed in between words: “Ah, little silly girl. Everything burns. In this life, everything burns. You’ve always known that, didn’t you?" Like all the other things around Maria, the old woman combusted and died, laughing in Maria’s ignorant face. Once upon a time… there was a girl normally abnormal, who would never feel the comfort of normallacy again. This is story of Maria, and her journey. She built up a rocket, shooting herself into the abyss of the sky, as far away as she could. Into abyss from the eyes of the old woman...

And like this, up above, the little girl sat quietly and cried. Days went by, years went by, and eras went by...and down below people forgot about the real Maria. However, she lived on. She would heat them up on the coldest days. Lending energy to the plants, she turned out to be seen as the symbol of God and life. Artists depict her as a big yellow ball of light in the middle of the sky. People would give her the most diverse set of names: star, phoenix, and chemical compositions. They gave her a thousand names. She just stood there... answering to them all.

They say that one day Maria will be engulfed by her own energy and turn into a dark abyss. For now, Maria still sits and cries. The truth is that she is perfect for the world, but she still cries. Ah, how much she cries...