Effects of Mobility Habits on Joint and Muscle Stress 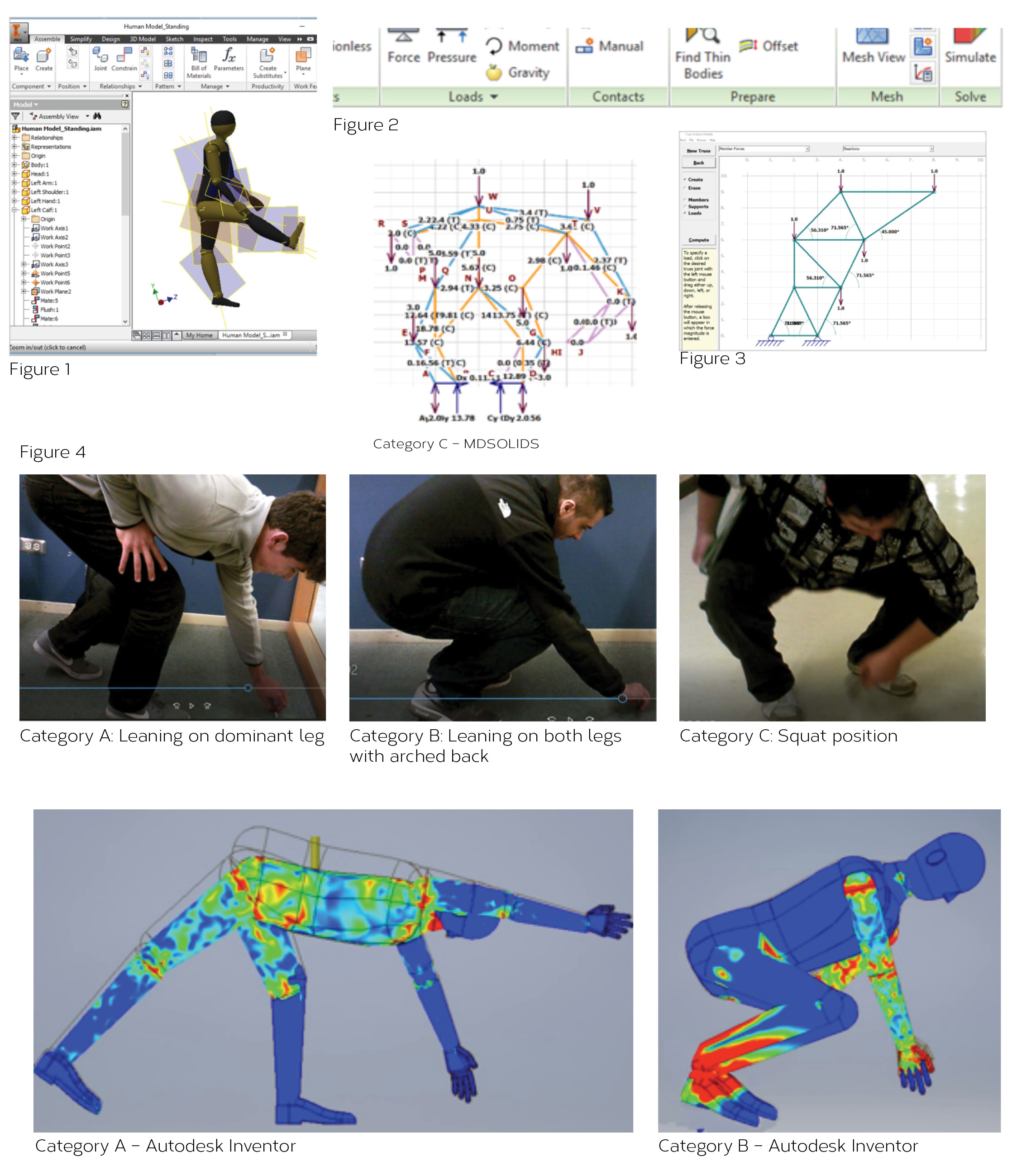 ABSTRACT - The objective of this study was to identify the effects of mobility habits on developing joint and muscle stress and to bring awareness to proper daily routines for mobility. A sample of 10 college individuals was filmed while picking up a pen from the ground. We used the Autodesk Inventor to simulate body stress on each individual at the final position when reaching the pen. Results showed that, generally, people practice one of the following three positions: 1) lean forward with one leg, 2) bend forward, or 3) squat. Simulated results showed that individuals have high stress on the joints in the first two positions. However, individuals who squat to reach an object, have high stress on thigh muscles. As the stress on the muscle could result in muscle growth, the squat-like position is recommended. However, as we go down the most in this position, it requires more energy to return to a standing position.

Mobility difficulties are fairly common with older people. According to Chappell and Cook (2016), the likelihood of disability increases with age. Therefore, as one grows older, his or her chance of acquiring a disability is greater. About 40 percent of people age 65 and older have at least one disability (United States Census Bureau, 2014). Disabilities bring about high health care costs for Medicare and other related needs (Fried & Guralnik, 1997). Nonetheless, many people with disabilities do not like living at a nursing home and rely on receiving help from others. Although disabilities are more common in the older population, “college students with high smartphone usage are more likely to experience impaired hand function, thumb pain, and other issues” (Simpson, 2013).

Mobility and exercise positions can play a role in bringing about disabilities. Therefore, it is important to spread awareness about how to ease the stress on the human body. Knowing what to do to prevent excess stress on the body is important as it can reduce the risk of future joint and muscle pain. Mechanical stress on the human body is crucial in many fields of study such as art, fitness, health, and sports. For art and fitness, pressure and stress can be prolonged when one dances or exercises in different positions. For health, orthopedics, chiropractors, and physiotherapists, for example, can look for a method to treat the patient by prescribing some exercises. For sports, shin splints (pain caused by the overuse of the shinbone) can be avoided if athletes are aware of body stress practices.

Current studies lack in addressing the effects of daily habits on prolonged pain on joints and muscles. This indirectly affects us because our simplest habits and tasks may harm us, but we are usually not aware of prevention methods. This may also indirectly cause disabilities because the things that we do on a daily basis may bring chronic pain or problems in the future. Our objective is to find the effects of mobility habits on developing joint and muscle stress and bring awareness to proper daily routines for mobility.

In order to see how simple, daily tasks may cause stress on our muscles and joints, we filmed ten people picking up a pen. After filming, we surveyed the participants about their age, weight, height, type of pain they had, and whether or not they exercised. We then analyzed their positions using the Stress Analysis module in Autodesk-Inventor 2016 (Figure 1). A three-dimensional human body model was acquired from the Internet. The model was posed to represent the position of the individual.

Figure 2 shows the details of the stress analysis module. We assigned the material as generic, with the density of a human to be about 1020 kg/m3. The mechanical constraint was the sole of the foot, which was fixed. We defined the gravity as the load. The contact between different human body parts were bonded. The model uses the Finite Element Analysis (FEA) method to calculate the stress. The model is meshed to thousands of elements and partial differential equations are set up using the boundary values. FEA provides a numerical technique for finding approximate solutions to these differential equations.

Although we were able to model our subjects, the models are far from being exact, as it is hard to factor in the density and weight distribution of the human body. Even if we could do that, everyone is different and some people have more muscle, which is denser than fat, than others, and some people have more fat. Furthermore, the model we used was not created for our study, so we also had some mobility restrictions when trying to simulate the right position.

We used the MDSOLIDS as an additional method for stress analysis. The truss analysis module in MDSOLIDS was used. Figure 3 shows a sample truss representing a human leg. The challenge with MDSOLIDS was figuring out how to distribute the weight over the human body.

Equation 1 shows the work due to gravitational force. The work produced or consumed is the change in potential energy which depends on the weight of an object and its vertical displacement. This is important in our study because we consume work when we go up to a standing position.

Figure 5 shows the results for stress distribution over the human body. When an individual leans forward with one leg (Figure 5.a), the stress is on the knee and on a majority of other upper body joints. When an individual bends forward (Figure 5.b), the majority of the stress is on the lower back, ankles, and the hip. In the squat position (Figure 5.c), the majority of the stress is on the thigh muscles. In the average life of a human being, movement and strain of muscles occur constantly. From life as a young child through old age, we are constantly controlling and stretching our muscles to do certain tasks. Everything from dancing to exercise to housework means that our bodies are in a constant flux of moving and not moving. Even the small act of picking an object up, like a pen, stretches back, arm, and leg muscles. This, multiplied a multitude of times, can cause many complications later on in life, varying from arthritis to disk back pain. As such, people’s habits add up to either fatigue, at minimum, or physical pain, at maximum.

Applying high stress on joints is especially bad because it harms the joints, which cannot be replaced naturally. On the other hand, stress on muscles can result in muscle growth. When muscle tissues and fibers become damaged, our bodies repair or replace those damaged muscle fibers by stimulating muscle cells to divide. After dividing, the cells undergo a cellular process where they fuse the muscle fibers together to form new muscle protein strands called myofibrils. The myofibrils enlarge and increase in number to create muscle growth, which we see on a macroscopic view as a result of exercising frequently (Leyva, 2013).

When we go to a squat position, our muscles are being stressed on which results in muscle growth. However, when we bend or lean forward, stress is on the joints, which could be harmful in the long run.

The elderly make up a majority of our population. With this comes the need of more care. A study in 1997 found that 65% of people age 85 or older do not reside at a Nursing home (Fried& Guralnik). Between the years of 1997 and 2004, the Older Americans Act Amendment of 2000 was amended and the Medicare Prescription Drug, Improvement and Modernization Act was signed into law in 2003 (Wikipedia, 2016). These laws helped expand health benefits and accessibility for seniors and could explain the decline in nursing home patients.

Currently, we have a working class that consists mostly of older individuals with the number growing larger still. In fact, employment of healthcare occupations is projected to grow 19% from 2014 to 2024, adding about 2.3 million new jobs (BLS, 2015). This growth is expected because federal health insurance reform should increase the number of individuals who have access to health insurance. A paper published by a Duke University researcher in 2006 found that more than 40% of the actions people performed each day were not due to decision making, but habits (Pink, 2012). To put it into perspective, people doing tasks act 60% on logical processes but intermixed in it are quirks that each person may have. That raised these questions, “If habits are such a big part of our lives, then what does it mean for the elderly? What does it mean for young people? What are people doing and how are they doing it?” We set out to record one basic act, picking a pen off the ground. This task uses back, arm, and leg muscles, and also depends on the person’s preference on how to grab the pen.

Our study aimed to investigate the effects of our daily habits on muscle and joint stress. We filmed ten people picking up a pen to see how simple, daily tasks may cause stress on our muscles and joints. Results showed that people usually use three different positions to pick up an object: 1) leaned forward on one leg; 2) bent forward with an arched back; and 3) squatted. From simulated body positions, it was observed that individuals who leaned forward on one leg, experienced high stress on the leaning knee. Also, the simulation showed that individuals who bent forward experienced high stress on the lower back. Individuals who squatted had high stress on the thigh muscles. Applying frequent stress on the thigh muscles can lead into muscle growth. Therefore, from the health perspective, it is recommended to go into the squat position in order to pick up an object. However, in the squat position, people require more energy to return to a standing position due to higher displacement of center of gravity.

Many researchers focus on treating or accommodating people with disabilities. There have been few studies on behavioral causes of physical disabilities, and how our daily habits can bring about future disabilities. This research is intended to show how a common, daily task can cause stress on our joints and muscles. Results could be useful for many future studies on the areas of fitness, art, health, and sports. In addition, it can raise awareness with the general public by adjusting their daily routines to lower the stress on their joints.

There were several limitations with the current study. The survey was limited to only 10 individuals. It is suggested to expand the study to a greater population. The human model used for stress analysis was not an actual representation of different individuals. It is recommended to create a new model with individualized fat and muscle mass distribution. This study did not investigate the effects of gender, level of exercise, height, and weight on how we pick up an object. This was due to our small sample size. Therefore, it will be worthwhile to look into those factors in the future.