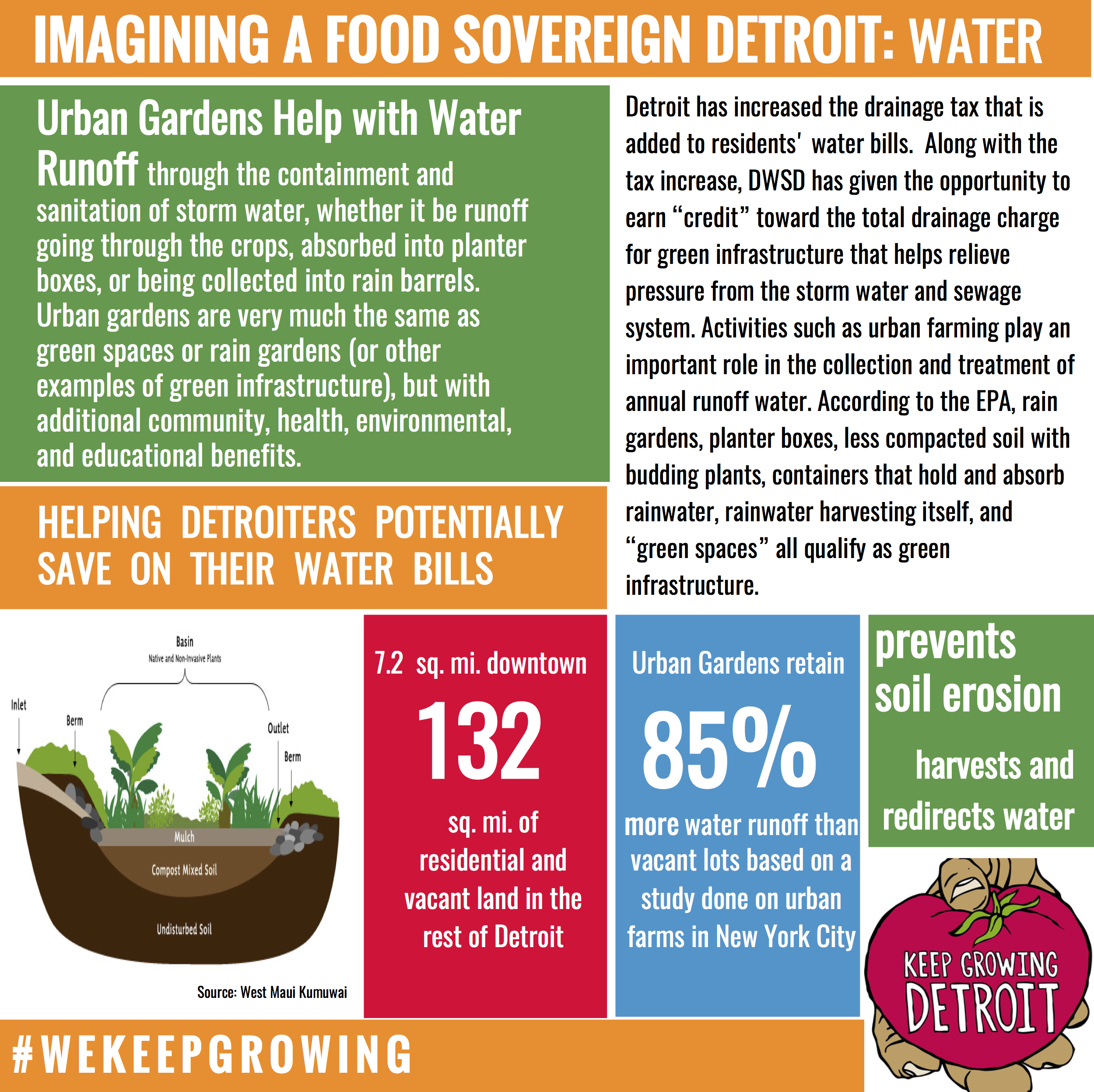 Impervious surfaces are defined as any surface resistant to the absorption of runoff water, including parking lots, roof tops, and standard concrete pavement. However, activities such as urban agriculture and development provide a solution to the rising cost of sewage and runoff treatment facilities. It is estimated that the Detroit Water and Sewage Department (DWSD) spends an annual $125 million on regulating water treatment of its combined sewer system, in which storm water runoff is combined with residential sewage. As a result, Detroit has increased the drainage tax, originally implemented in 1975, that is added to residents’ water bills. Along with the tax increase, DWSD has given the opportunity to earn “credit” toward the total drainage charge, up to, and no higher than, 80 percent. 40 percent is determined by the average reduction of storm water runoff on a given property, while the other 40 involves storage volume/flow in a certain area. The remaining twenty contributes to the maintenance of sewage systems and facilities, along with the resources crucial to water treatment, which is largely determined by the status of the runoff passing through the facilities, as well as the volume of water treated annually. Not only can businesses and residents earn the credit by maintaining water on site, but activities such as urban farming and green infrastructure play an important role in the collection and treatment of annual runoff water.

Urban agriculture not only economically, socially, and safely rejuvenates a community, but should also be perceived as an effective method of green infrastructure. At its basic, DWSD defines green infrastructure as anything that mimics the natural water cycle, filtrating and absorbing storm water to relieve pressure from stormwater and sewage facilities. These green initiatives can be anything from rain gardens and the redirecting of downspouts, which are realistic to homeowners, to green roofs and bioswales, which gain traction with businesses. In the same sense, urban agriculture involves the containment and sanitation of storm water, whether it be runoff going through the crops, absorbing into planter boxes, or being collected into rain barrels. Even in the case of “impervious” greenhouses, with the right slope and proper retention basins, they are just as effective with reducing runoff volume. In a 2008 study of rain harvesting in NYC community gardens, 35 independent systems retained a total of 422,900 gallons annually. Urban gardens are very much the same as green spaces or rain gardens (or other examples of green infrastructure), but with the additional benefit of providing a safe space capable of applying education, community interaction, affordable and nutritious food, and control over the retention of runoff by methods such as water harvesting.

Detroit’s major incentive for the increase of drainage tax comes from a supposed impending $2 billion increase to the cost of managing its Combined Sewer Overflow (CSO) if current pursuits of reducing annual volume of runoff fail to make substantial change. The current water management system not only receives city runoff, but output waste water from chemical and electrical plants. Essentially, the higher volume of runoff intake, the higher the chemical content, the higher the tax will remain. This is exceptionally unfortunate in the case of residents attempting to get a tax credit, in contrast to the companies able to afford green initiatives to the extent of obtaining maximum drainage credit. DWSD’s green infrastructure program expresses methods of “greening” areas such as parking lots, city pavements, and rooftops. Expenses necessary for such initiatives may be possible for businesses, which in turn would set a precedent for urban development in business sectors, however, the vast amount of surface area occupied by residents of Detroit (132 sq mi residential compared to 7.2 sq mi downtown) will not live up to the desired efficiency if activities such as urban agriculture are dismissed rather than be included as effective methods of storm water management. The New York study on water harvesting proved that communities and people within them are more than willing to put in the time and effort to assist with the water management needs of the city if it also means helping their own household budgets, just as companies are not only trying to create a healthier infrastructure, but to qualify for tax credits.

Fortunately, there are still ways to obtain credit as a resident. Firstly, 0.02 acres (871.2 sq ft) of land is exempt from the tax, which although small, could be a solid starting point on the topic of hoop houses, greenhouses, and vacant lots used for smaller urban grow sites. Second, a rain barrel or some form of rain harvesting is inexpensive and can provide near maximum credit toward the tax. Just as well, projects such as rain gardens and planter boxes are extremely effective and realistic for homeowners, granted they have some knowledge of the specifications that qualify as green infrastructure, and help from organizations such as Keep Growing Detroit can help in that regard. Directing the downspout into a pervious area rather than the wastewater system alone is grounds for credit. However, the most crucial way to give residents the opportunity to obtain credit is to somehow get city officials on board, or elect city officials already on board, to push for urban agriculture itself as a green infrastructure credit rather than a reduction of impervious space. Less compacted soil with budding plants, containers that hold and absorb rainwater, rainwater harvesting itself, and “green spaces” are all qualifications for green infrastructure, yet are the most important aspects that compose urban agriculture as well. Not only should residents contact their elected city officials and push for proper recognition and support of urban agriculture, but groups such as Keep Growing Detroit should take on the initiative to get residents informed about how they can play a major role in changing the definition of green infrastructure. The EPA’s report on Green Infrastructure Opportunities elaborates on what individuals and community organizations together can achieve by planning, getting informed on permits and regulations, and obtaining the manpower, whether volunteer or paid, to start a green project involving the use of urban agriculture. With the assistance of Keep Growing Detroit, Greening Detroit, and other non-profit organizations, not only could more residents be aware of how to combat the rising drainage tax, but work together toward improving the environment, which will benefit both residents and the local government.